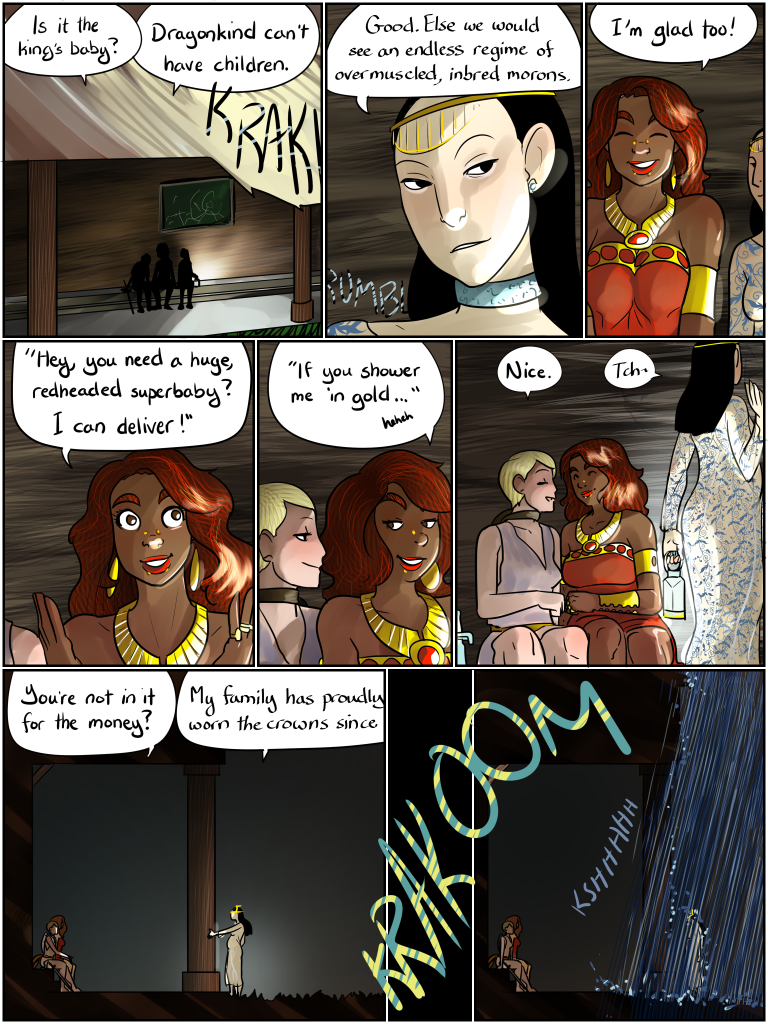 Kinda feel bad for Platinum here, she sounds a bit like an idealist, but I think she got the gist of it - Nothing can ruin a good kingdom like inbreeding and ending up with a retard on the throne.

Nothing can ruin a good kingdom like inbreeding and ending up with a retard on the throne.

Well Guin is totally hitting on her!

And... was that bad timing on Platinum's part, or did Venne deliberately wait until she was outside?
view 17th Feb 2018, 1:13 PM
edit delete reply

Platinum is cursed by the Gods.

No Platinum is just a bitch, karma at work unfortunately she took the lantern with her leaving everyone in the dark.
Sheela 18th Feb 2018, 6:21 AM
edit delete reply

I don't think she's a bitch, per se, but rather an idealist.

And while a bit austere, she is very pretty.
So she's probably used to having things go her way.
chrystal_dark 18th Feb 2018, 9:48 AM
edit delete reply

Maybe there's at least one god who doesn't like her? Remember what Terry Pratchet said about atheists on the disc world? Perhaps she's an atheist?
(-)_(.) kadaka! 18th Feb 2018, 10:38 AM
edit delete reply

Wait a minute. To have a royal lineage you need use of a dragon crown, which are horrendously expensive.

A dragon crown will create a sterile hybrid known as a dragonkind which is royalty.

For a dragonkind ruler to then have a successor, they need a horrendously expensive dragon crown. And it won't ever be THEIR CHILD, despite the strength of the inherent urge to breed and spread one's own genetic material. The best they get is to deliberately screw up some other kid as was done to them, whether they like it or not, then adopt and pretend.

So all this is a giant marketing scheme where these "dragonkind" rule and the suppliers of the dragon crowns rake in the wealth of kingdoms. Sweet monopoly.

And as should be expected with such a dominant monopoly that shaped these beings, there's likely something involved where the dragonkind can be made to unify against the "ordinary people".