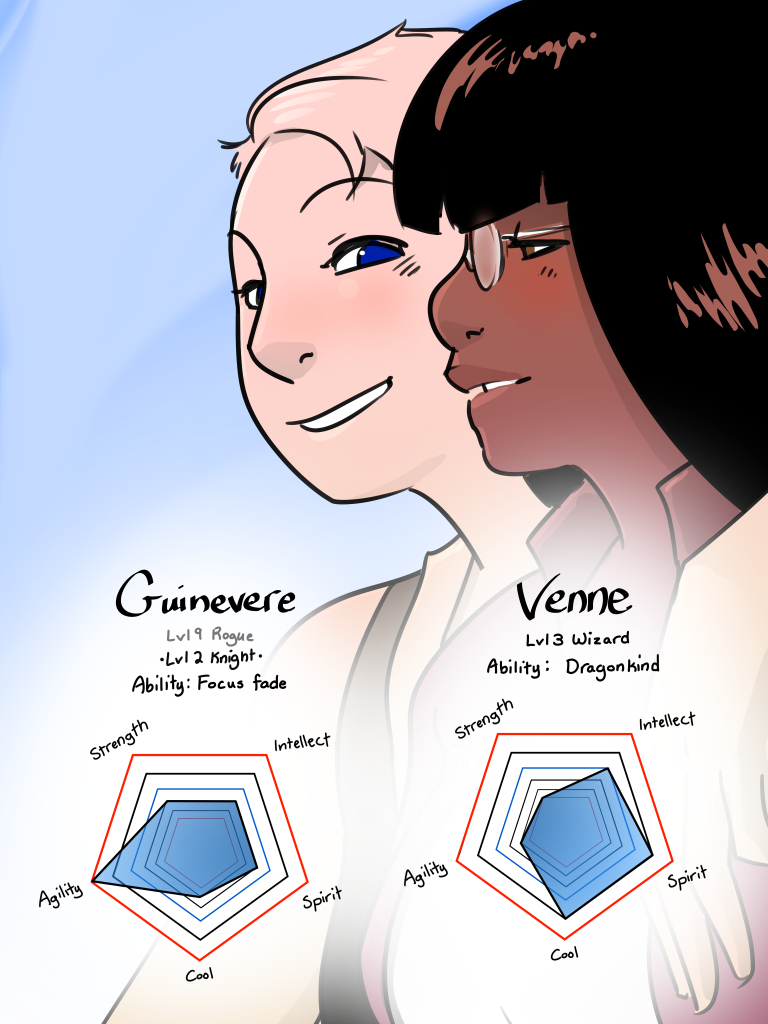 So, there's no meta-story, but I wanted to try telling a story where there's stats and a system. I hope that A) people might be interested in making their own characters, and B) the stat pages serve as good breaks in the flow of the comic.

Well, we'll see. Here's the page without the text:

Assumptions/deductions:
Strength is linked to health, as indicated by Venne’s bad back and possible needing to rest after one fight.
Agility directly influences difficulty in being hit, as indicated by Guinevere not being hit once, despite being surrounded by devildogs.
Spellcasting ability is likely shared between two or three stats: Int, spirit, and possibly cool. Int may influence how many spells are available to cast, as Venne is “sick of fireball.”
Stat points are not gained with character levels, or are lost when switching classes.
view 29th Apr 2017, 8:30 PM
edit delete reply

Largely right, although there's no granted 1. That inner ring is 0.

Spirit determines how many circles you can cast per round, int and cool help the effects once cast.

Venne's bad back is a flaw, not a stat-related thing.
BlitzMcGee (Guest) 29th Apr 2017, 9:25 PM
edit delete reply
Ahh, I'm used to systems where a "0" in a stat represents no ability whatsoever. Having a zero in strength you wouldn't be able to get up and walk, much less slam a devildog across the field.

I'm guessing the "Dragonkind" bit might've had something to do with it.

Also, wondering if maybe her body isn't quite capable of handling the strength, or as you alluded to, she's just got a bad back.
tedweird 30th Apr 2017, 2:09 PM
edit delete reply
Guin's Rogue 9/Knight 2? Wouldn't that mean she's got 8 levels on Venne? If so, pretty much any encounter that Venne is overwhelmed in, Guin could breeze through
Mirrored 30th Apr 2017, 7:10 PM
edit delete reply

Could be a re-imagining of the standard use of "will", her ability to remain "cool" under pressure?
view 1st May 2017, 2:18 AM
edit delete reply

Maybe make a page that describes the stats then ?