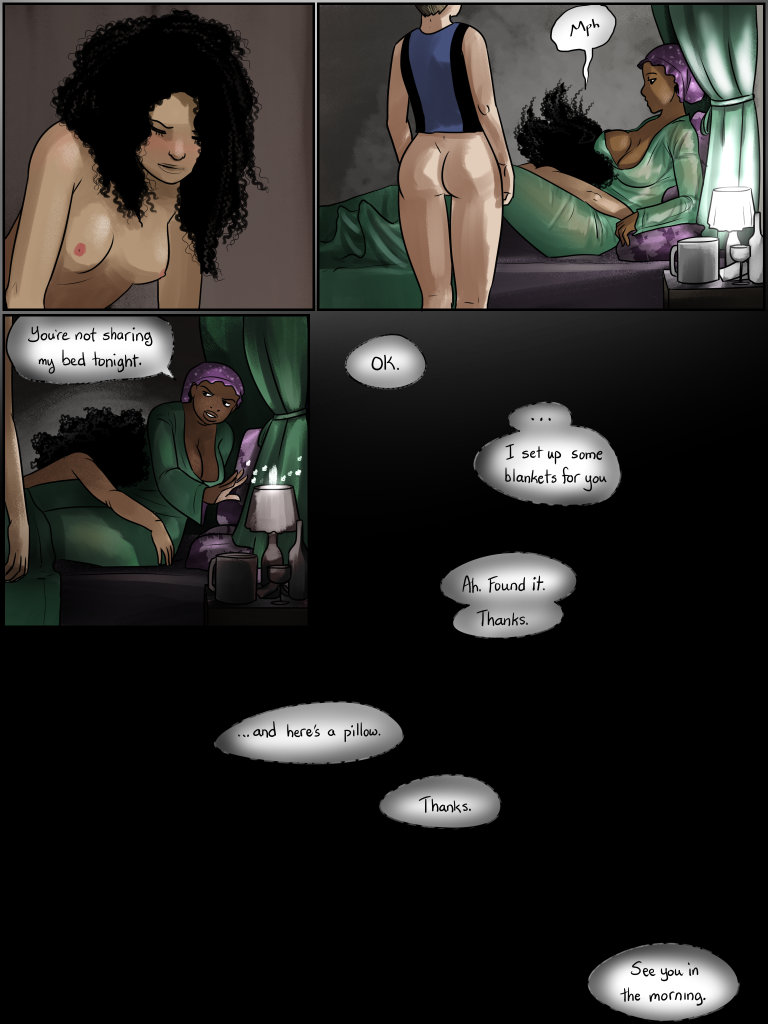 Feelings Venne will never return. Which Guin has known for quite some time.

Guin asked if they slept together. As in sleep. Not if they fucked.

Guin swore no oath. It's a job. She feels obliged and a sense of duty. And some validity in seeing how her efforts support being of help to people.

You get the prize!

Why should Venne have to put up with that shit? Guin's stirring things she doesn't understand and Venne's put behind her. It's not Guin's fight to pick, and doing it against Venne's wishes is simply wrong.
Cuddle Lion 5th Jun 2020, 10:04 PM
edit delete reply

After a lifetime including heartbreak, tragedy and paralyzing loss, I feel qualified to say that people who love are often willing to put up with damn near anything, just to keep from being alone. ANYTHING. But that doesn't mean they won't, or shouldn't, try to make things better.
ShoShone 6th Jun 2020, 2:22 PM
edit delete reply

What else is new?

Yeah, she doesn't know what that was all about or how it went down. She has no business making snap judgements. And it was quite some time ago.

Yet Guin did do the right thing. Just for the wrong reason.

Guin and Venne are both wrong. They're both overlooking something.


It's not Lacey so much. It's Dax. He broke the agreement to transport the prisoners to court in the east. Venne shouldn't just casually let that go.

For the same reason Guin sticks to Venne and Venne sticks to Guin and the Wolf Knights stick to Dax and...
ShoShone 6th Jun 2020, 2:52 PM
edit delete reply

And he really thought that was going to go well? He knew his friends had done wrong. He thought they'd never have to face the music? Breaking the agreement was dishonorable as well. It was his duty.
Oldarmourer 5th Jun 2020, 2:01 PM
edit delete reply

Venne had the blankets set up beforehand. She didn't know how she'd show.


Guin has had a beer or two. She's not slurring her words. She knows what she's saying. She's quite sober.

It should be at least as much patience as Guin has for drunk Venne. Should.
wayside 5th Jun 2020, 6:56 PM
edit delete reply