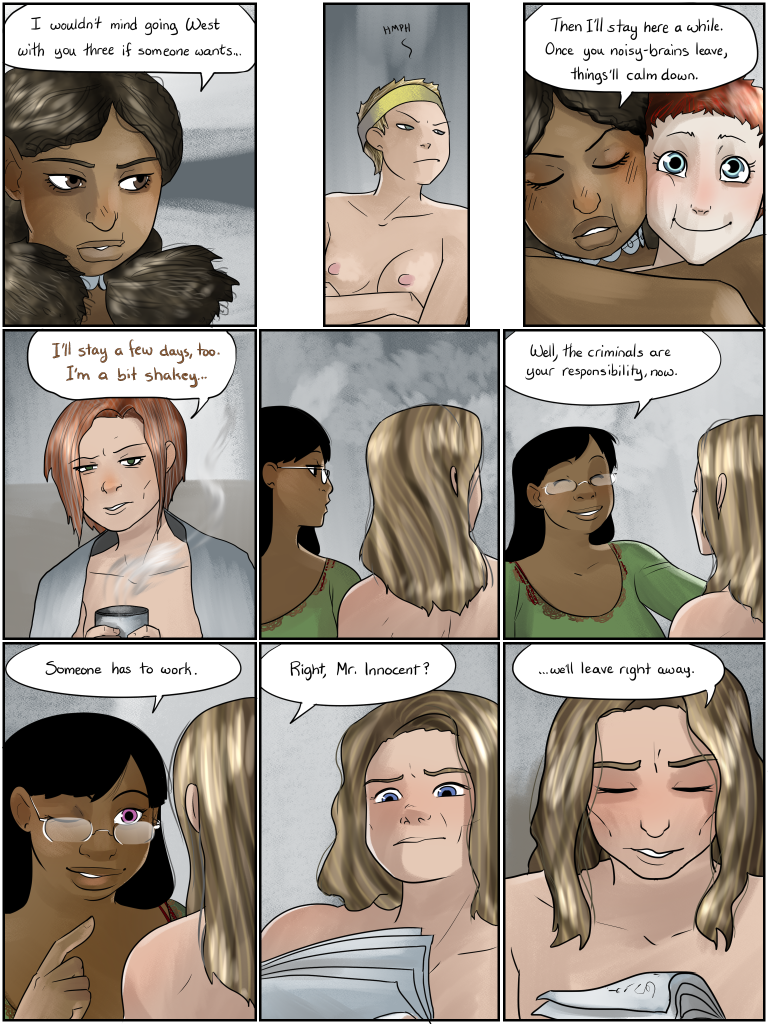 Just a mite confused. The blonde guy was one of the people they met on the way in, Dax, I think his name was. The miserable looking redhead is the one the baddies had locked up. But I thought the other redhead was a spirit projection? Clearly she's actually real...?
Lee M 9th Mar 2020, 1:15 AM
edit delete reply

If I'm reading this right (a broad assumption, I know) the redhead is a spirit projection, the sorceress's exaggerated caricature of Guen, that continues to exist because the sorceress desires her strongly. See here.
(-)_(.) kadaka! 9th Mar 2020, 2:21 AM
edit delete reply

The Guin-like spirit projection showed up in the swamp and has been around Zia since then, except for disappearing briefly Sep 23 when Zia entered that circle in the courtyard and Dax called it Volgat. Zia even painted her nails back on Oct 11. While the projection briefly turned a bit bluish when "drowning" was mentioned, Zia appears to have stabilized her.

Right, I think that makes sense. I just couldn't understand why she was still there when all the others were gone. But if Zia has her stabilised that makes a lot of sense. I think...?
Sheela 9th Mar 2020, 9:48 PM
edit delete reply

I'm pretty sure that the temporary nature of the relationship was emphasised a while ago... No time right now to go hunting back...
ShoShone 10th Mar 2020, 6:38 PM
edit delete reply

You don't really have to do much of a hunt for it. From the drop down select the chapter title 'Earth.' Then under that it's not far from 'Three Drunk Ladies.' Something like 'Going Down,' 'Morning' and then ’Ground Rules' where Guin announces it's a fling.

But under 'Spirit' select 'Rabbits' to see that Guin has chosen to continue with Zia. And before that under 'Earth' with 'Rain' or the next page she's groping Zia's boob.


Guin can ditch Zia but it's capricious how she chooses to break it off just now. She's in a huff over a spirit forming upon Zia's desire for her. WTF?


But has Zia been playing with this ghost all this time? Or something more?
Post a Comment