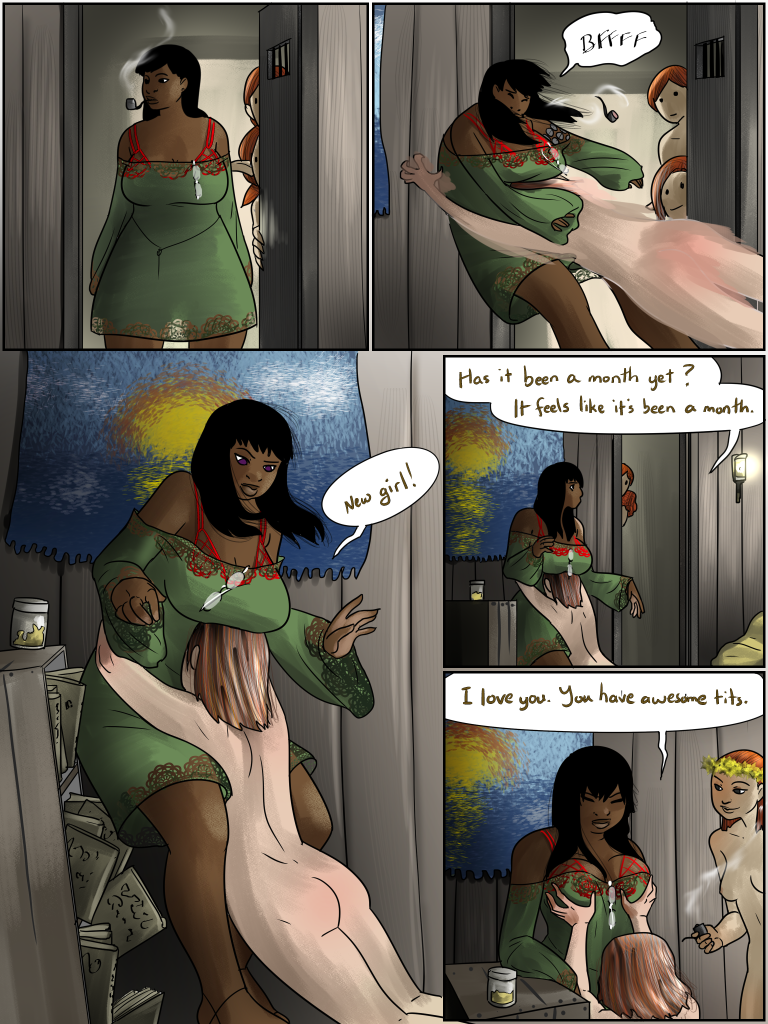 That's not supposed to be a thigh gap so much as her standing with her feet apart. Her crotch isn't intended to be at the lace line.

Oh dear, this appears to be a misunderstanding.

Though I guess now we can see how the reprogramming was happening...
ShoShone 28th Dec 2019, 1:05 AM
edit delete reply

Somebody asked what's a christmas?

Okay, so, around two millennia ago a guy heads up a popular Messianic Israeli movement. But he denounces a guy with political aspirations to get an appointment from Rome as King of all Judea and pisses the guy's new Bride off. Which gets him killed. That is after a year or two in prison. His followers seeming to be looking for a new leader. He has a cousin with Rabbinical training (with talent as a faith healer and a reformist) he had prior seemed to have given a blessing to. His cousin then takes over as leader of the movement.

The current Roman Caesar (who never really liked the job so much) finally figures out his appointee's schemings to be the next Caesar. Family was killed via poison in these schemes. He's executed.

A catastrophe for the guy wanting to be the Hebrew King. He must back up and distance himself to survive. He must cease all backing for the Messianic Leader. His backing gone, he is soon arrested. A half year later after some public exhibitions he is crucified.

But when the guy was born supposedly there was a new star in the east. And three kings from the Orient visited him bearing gold, frankincense and myrrh. Something about a stupid little drummer boy. Oh, and it turns out the guy wasn't a humble carpenter but was a wealthy contractor. Christmas celebrates the guy's birth.

But such socio-political shenanigans resultant in a botched spiritual movement, mix it with a little paganism (solstice) and two millennia later then it just doesn't seem relevant.
Cuddle Lion 28th Dec 2019, 2:22 AM
edit delete reply

OK, so that was all completely unnecessary, and slightly trollish to boot. I'm sad I read it.
ShoShone 28th Dec 2019, 4:40 AM
edit delete reply

Naaaaaah. View asked what's a christmas. Well, that's what it was about.

According to history and archeological evidence. Sorry to see learning isn't your cup of tea. But some folk find education to be a good thing.

I thought it already was done. But, hey, it was your question.
Sable Phoenix 28th Dec 2019, 2:59 AM
edit delete reply
Apparently to reprogram a spirit you need to kidnap and imprison someone for it to imprint off of. I forsee the mage getting an epic beatdown in the not too distant future.

Crater High is on SmackJeeves, for now, with SJ getting reworked into a Webtoons clone so formatting may change.

Added: Ouch, it's stretching the old strips to screen width, and it hides the pics so you can't 'view image' and see them proper.
view 28th Dec 2019, 4:20 AM
edit delete reply

Yeah, I just kind of let it float.

I've never seen Cheer or Crater High. What are those about? This is the only webcomic I've looked at from view. Links to his other works?
voxman314 (Guest) 28th Dec 2019, 9:30 AM
edit delete reply
When I made my list of recommended View works, the high school one is the only one I knowingly left out.
Some good concepts and early art, but somewhat inconsistent, and filed under "they aren't all gems" for me.
http://voxman314.simplesite.com/432618730

View's later work has definitely been better (and more varied!) than Cheer, but that doesn't mean any of the older stuff is bad.

Not all good things are good in the same way, and that's fine.
One-eyed Mike (Guest) 28th Dec 2019, 9:15 AM
edit delete reply
I've looked through Crater High. Some very funny bits. I wasn't aware of that one