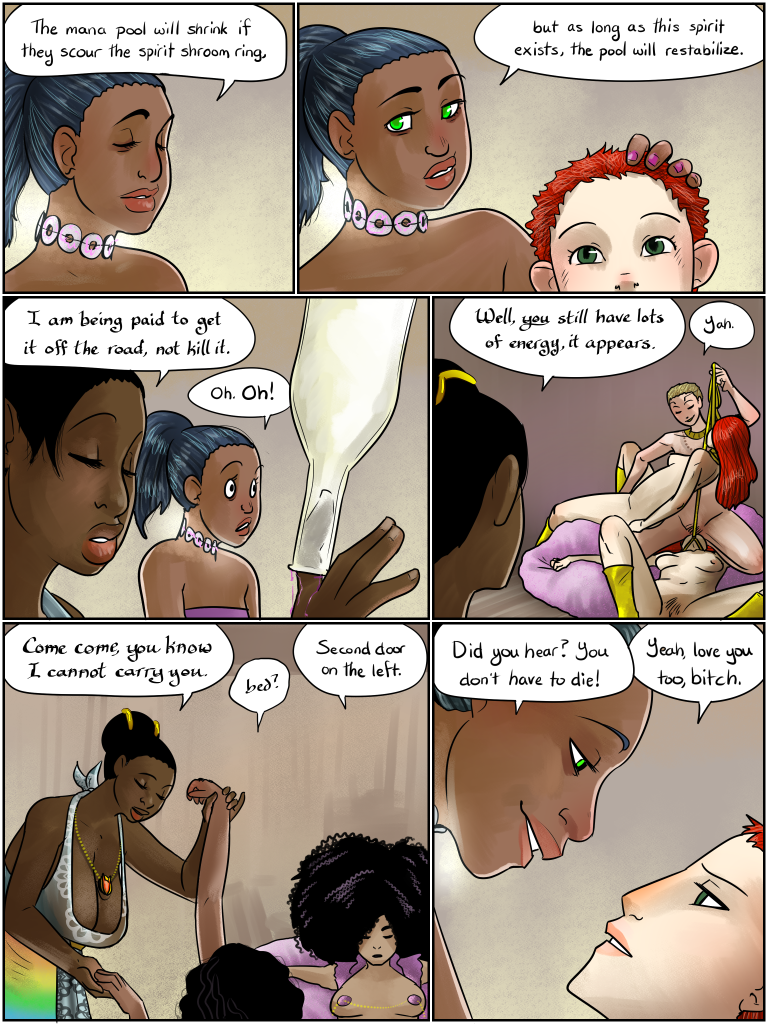 Hm. Not sure about this. I've been playing around with some stuff...
User comments:
Post a Comment
Cuddle Lion 27th Oct 2019, 4:57 PM
edit delete reply

That's a pretty good compromise. Clear the road, coming through! O....Look over there! Shrooms!
LOL.
ColdFusion (Guest) 28th Oct 2019, 1:56 AM
edit delete reply
Wow I just realized I've completely lost track of this plot. No idea what's going on.. and I don't even mind. Havin fun, just along for the ride. Usually view comics require going back and reading again after the end recontextualizes everything anyway.
One-eyed Mike (Guest) 28th Oct 2019, 5:28 PM
edit delete reply
Yes. I feel that I am missing something in the last two or three pages. Is there a dummy's guide? I'll probably have a smack face moment but I prefer that to missing the point.
Andrew_C 29th Oct 2019, 7:00 PM
edit delete reply

Well it looks like Venne, Guen & Guen's hookup (can't remember her name) were separately hired to clear whatever it was blocking the road. Tia had run away from her fiance, who is apparently boring.

The water spirit or spirits behind all the sexy apparitions apparently is, but only because it was asked to keep people away from the brothel until it was open, and it either got a bit overeager about that, or the fairy ring boosted it's power, or both. One of the people running he brothel, or at least getting it prepared, is an old friend of Venne's.

Tia is currently rather sleepy after an extremely reling massage and Guen & her hookup (still cant remember her name) are enjoying the specialities of the house. Venne appears to be the only one paying attention to the job, having sent the spirit off to destroy the fairy ring.
view 29th Oct 2019, 10:09 PM
edit delete reply

Yes, although you saw Guen and Venne get hired by the lady whose name you don't remember.
Andrew_C 31st Oct 2019, 1:51 AM
edit delete reply

Thanks, I thought they were doing the old mercenary trick of getting twice for the same job.
Sheela 28th Oct 2019, 12:02 PM
edit delete reply

The color work has gotten so much better! It really brings everything to life. That sounds cliche but it's true.
view 29th Oct 2019, 1:54 AM
edit delete reply