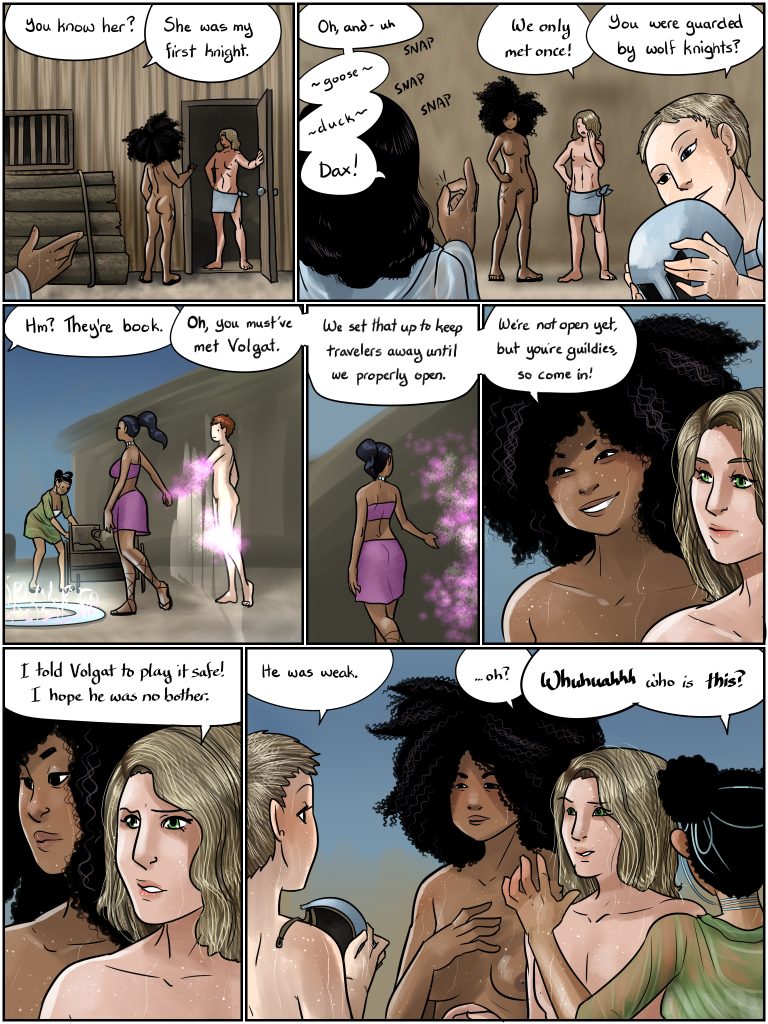 I wrote myself into an exposition corner. It was either do this over three pages or do it in one.
User comments:
Post a Comment
ShoShone 24th Sep 2019, 1:21 AM
edit delete reply

Which time zone are you in?

They did that shit and just blocked the way off entirely? Fuck. Rude. They should have blocked off the pathway to their fort only. Not everything.

Hmmmmmm ... Must not be too big ... Give him a longer loincloth and we'll just say he's got eleven inches and thick.

I considered making him nude too, but it seemed forced. I mean, all the nudity so far has been so intrinsic to the plot...
ShoShone 24th Sep 2019, 11:19 PM
edit delete reply

Well, exposed vulvae (first V word) are cool but I don't think the ladies should be required to open up completely. (Yes, I'm aware of the colloquial misuse and interchange but, hey, fun with words.) Nothing wrong with that but it's not necessary and they should be let to do only as they're inclined.

Also, siding with Laci Green, I don't like the second V word as it denotes subservience and deference to men, being lower. It means a sheath for a sword. Sword understood as euphemism for penis.

But cunt denotes feminine power and beauty. And the Catholic priests can go to hell with their besmirchment, fear and vileness.

Well, maybe Tia might want to see how much he's got. A swift yank on the loincloth could be in the plotline somewheres.
view 25th Sep 2019, 12:10 AM
edit delete reply

I'm also not averse to drawing trees and rivers and walls. It just doesn't occur to me to showcase them.
ShoShone 25th Sep 2019, 1:55 AM
edit delete reply

What's this, people are assuming the dude has a Jack when they could have a Jill? If magic in this universe can make an ant queen and a gigantic squid then it sure should be able to do some small body mods to more match a person to their identity. So what if they didn't go with the Full Monty?

Precedence isn't assumption. The artist is rather easy with showing off "Jill" as you say. Dude has a loincloth on. Showing off "Jill" hasn't been avoided much. Not that the artist won't show "Jack" but scroll up a tad and read the artist's explanation for the precedent.
Sheela 25th Sep 2019, 11:02 AM
edit delete reply

Quite a bit of exposition that come off fairly easily.
We find that Lacey was Venne's first Knight and that she's of another faction of Knights than Guinevere.
We also learn that Venne has excellent memory, by remembering Dax's name, even though they only met once.
We also learn that there's another member out there, named Volgat, who did the illusions, which Guinevere thought was weak sauce.
We also learn that the camp is warded against illusions (no surprise).
And that Tia is man happy, but we kinda knew about that already. 😂

Yeah, it would be good to do that. Soon.


I pretty much took it how Sheela did. Except for my guess was Volgat being a spirit peeking into people's minds in order to appear as somebody who strikes each person's fancy. If Vo was a shapeshifter, the being, albeit of malleable form, would still be flesh or substance. And couldn't just swiftly dissipate into vapor. Or is Vo a Swamp Gas (or Fog) Entity capable of temporary solidity? Shapeshifter and teleporter? But my guess was spirit making illusions.


So, being not real that leaves illusion. But you say no. Or do you call it projection? Semantics? What's the third option? Or was it one of those I rejected?


You say no Volgat but Dax refers to speaking to some such whomsoever. Was he talking to himself? An extract of his own subconscience (or superconscience?) created to carry out specific magical tasks while actual Dax is doing otherwise? What else is there?
view 26th Sep 2019, 12:13 AM
edit delete reply

Oh man, I had completely forgot about him.
Didn't think he would be part of a new settlement.