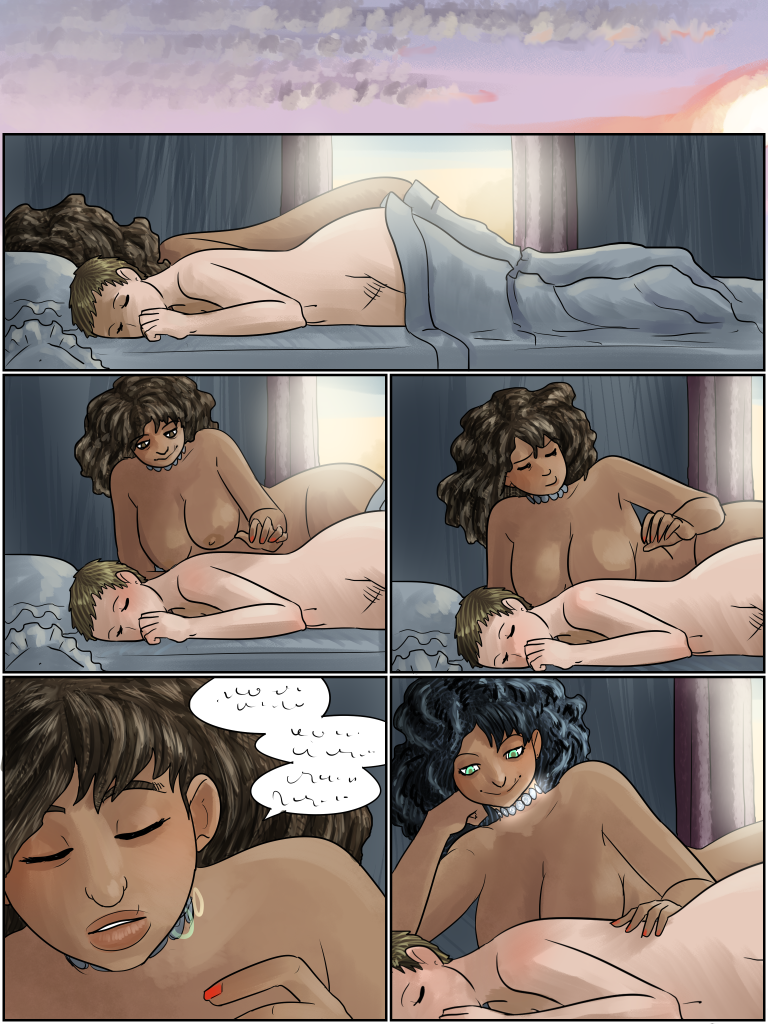 True, she ate a fur-burger!
But that was last night!

Someone is using more than a bit of glamour there...

It also made her boobs bigger. Surprised you guys didn't notice that!

No. In panel two her boobs are hanging loose or unsupported. Panel three those are resting on Guinevere's upper back and neck, pushing them a tad up and out.

I don't know what sort of spell she's casting but it looks like she's putting it on Guinevere. That better be a spell of protection she's using but somehow I doubt it. Casting a spell on a new lover without her consent or knowledge. That's not a friendly act. This can't be good.
Guest (Guest) 13th Apr 2019, 11:05 AM
edit delete reply
Before she casts the spell, her hair and eyes are brown.

Afterwards, her hair is black and her eyes are vivid green.

I think there might be some effect on her skin too? I can't see a difference in tone, but she realises something's off when she sees her hand, so I presume there was something that tipped her off there.

I'm a little wary of her, so far, but not completely distrusting - maybe she's vain and doesn't like how she normally looks, maybe she disguises herself when on the prowl so drama can't follow her back easily.

Or maybe she's using a charm/compulsion spell to seduce people, sleep with them, talk them into giving her all their stuff, then abandon them in the middle of a random town and move on.

Her eyes are already green and her hair black. She's not casting a spell on herself but on Guinevere. Her hair isn't changing color. That's the lighting and highlighting variations or shifting from moment to moment. As the spellcaster, energy may flow through her and make stuff light up or even glow. But, no, she is not the target of the spell.
Sheela 14th Apr 2019, 12:44 PM
edit delete reply

We mean she has brown eyes and brown hair *on this page* before she casts the spell.
I think Crystal has it right, and it's a glamor-spell, she wants Guinevere to see her at her best.

This is most definitely not a benevolent act. The hint that she uses a physical part of G's body, as a component of the spell suggests that its something intended to very specifically target her.
view 13th Apr 2019, 3:34 PM
edit delete reply


Anytime you wanna step in ...

Instead of just watching us flail around like a bunch of idiots.
Bellar 13th Apr 2019, 11:06 PM
edit delete reply

@ShoShone Don't you know it's most dangerous to try and save someone from drowning before they've tired themselves out? View's gotta let us flail or we'll pull them under.
Sheela 14th Apr 2019, 12:46 PM
edit delete reply

Watching people flail, is a source of great amusement for artists. 😂
Rezima (Guest) 13th Apr 2019, 10:06 PM
edit delete reply
You all are freaking out about what in my mind would be the most COMMON use of magic, glamours to make yourself look more attractive. It's basically the magical version of make up, she casts a spell to make her look more like her idealized self, very important when trawling for booty, what little booty guin has anyway
view 14th Apr 2019, 12:26 AM
edit delete reply

Hey, I resent that - Guinevere's booty is so EPIC, that if there was more of it, the world would become unbalanced!

She is using magic to make her hair black and her eyes green. In the scene where Guin is washing her back the manna discs around her neck are glowing - as indeed they are in every picture of her in which they are visible until panels 2 and 3 of this comic, where they are dull grey. And her hair and eyes are brown. In panel 4 she is casting the spell and there are "magic lights" around the necklace, and in panel 5 they are glowing again and her hair is definitely black and her eyes are definitely green.

@ShoShone, I have no idea how you can say it's a lighting difference when she is in exactly the same position a few seconds later? That would require someone in the lighting department of the comic removing the sepia tone filter off the spot lights... And there are no other changes to the colour of anything else, like Guin's hair for example...

Nope, I say her boobs get bigger, that's my opinion and I'm sticking to it. :-p

I did wonder about her nose and chin, but actually those can be put down to the fact that her mouth is moving and her head is at a slightly different angle...
ShoShone 14th Apr 2019, 6:02 PM
edit delete reply

It's quite clear. It's not a matter of opinion.

As for the spell I didn't recall seeing where view said she does that for her looks. But he said it and that's that. But her breasts are ample in frame two and nothing supports a claim of an increase there.
chrystal_dark 15th Apr 2019, 4:51 PM
edit delete reply

That's your opinion, and you're sticking to it!

Hey, no reason for you to make a fuss over it. You're the one who didn't have anything to back up your "opinion." All I did was state the facts. It's not something personal like how you want to make it.
Rezima (Guest) 14th Apr 2019, 7:10 AM
edit delete reply
She also goes from common brown hair and common brown eyes to an elegant raven black/blue hair and vivid sea green eyes, both uncommon and desirable traits. Though it is interesting that she keeps the scar while changing parts she'd rather keep hidden, it's subtle but speaks to what the character values appearance wise, wrinkles and boring traits are a no no, but interesting features that catch your eye like bright eyes and noticeable scar on her full pouty lips are a-okay.
Guest (Guest) 14th Apr 2019, 7:11 AM
edit delete reply
also looks like she changes her nose and head shape slightly, looking at it again?
Sheela 14th Apr 2019, 12:54 PM
edit delete reply

In a fantasy world like this, you just know that there's a Gown of BE somewhere out there. 😂