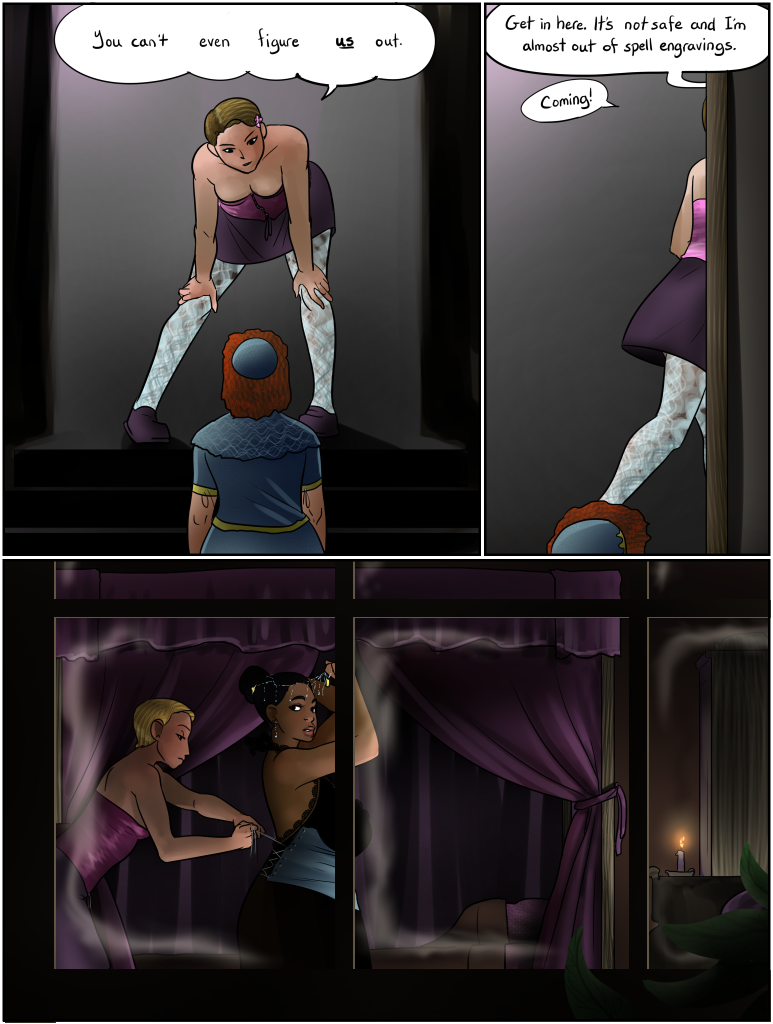 While Guin making a outrageous request like that didn't seem out of character, this page seems to fit the flow of the story better. There also isn't the abrupt change of mood or transition I noticed on the previous page 160 & a couple of the pages in the sewers last chapter. We can just wait for our sexy times.
Cuddle Lion 18th Sep 2018, 10:17 PM
edit delete reply

Yeah, I hate to say it, but this is better, story-wise. HOWeVER, that doesn't mean a similar scene can't happen when it would fit the mood better. BTW, I really like the peek in the window panel.
Lee M 18th Sep 2018, 11:06 PM
edit delete reply

I'm with Pyo, Icefall Kitsune, Andrew_C, Cuddle Lion & Lee M. Maybe you can recycle some panels from the other page but this is much better in all respects that were already mentioned. Plus, great job with curtains and the candle and the lighting in general. Looks homely!

So, when I first read the failed version, it already had the "ignore this" banner on. And my immediate thought was that you were doing a joke page, like people do on April fools' day. The dialogue looked like it had been written after everything else, and was disjointed. The scene just didn't flow properly.

I still think Guen should get to sexually humiliate Rinatta though. Just in a context that fits the scene in better. The previous attempt was totally gratuitous!

So now we wait to see if Venne is still oblivious to the fact that Guen wants to sit on her face and wriggle.
datora (Guest) 19th Sep 2018, 7:56 AM
edit delete reply
In agreement with the other commentary so far on pretty much all points: much smoother flow from previous page. Sad the sexy scene is delayed &/or changed to something else.

Now I have a sad for Rinatta. Knowing what was on the reworked page, seems clear that she was/would be totally on board and is now denied. Hope everyone ends up satisfied in the end.

Also, last panel through-the-window view: particularly rich and gorgeous. Might make a good stand-alone wallpaper if you're ever looking for a gallery of extras & misc art section to start up.
view 19th Sep 2018, 11:05 AM
edit delete reply

This fits a whole lot better from my perspective as a reader.

Truthfully, I feel like I have missed the conversation more than the boobage.
TeeKay 20th Sep 2018, 7:57 PM
edit delete reply

Aw, now you're just taunting me.

I wanna see that page too now! >_<
jmkool 19th Sep 2018, 6:27 PM
edit delete reply
This does flow better, but in the interest of passing around ideas, a possible blending of the two could exist? A flow where it begins with the first panel of this page, starts to flow like it did last page, then gets interrupted with the second panel of this page and something along the lines of "fuck, nvm" and a very disappointed half-undressed Rinatta. Though yeah, I still don't think that exactly matched the mood... Nothing in the scene has really led into it. So your new version flows best
Heckboy (Guest) 20th Sep 2018, 4:12 AM
edit delete reply
Yeah, the smut felt a bit rushed, when in doubt, slow down the pacing and spread things out a bit.
Loving it BTW!
Nounverber (Guest) 3rd Jan 2019, 6:55 AM
edit delete reply
Wait, sex scene between whom? Venne and Guinevere? What?
Post a Comment