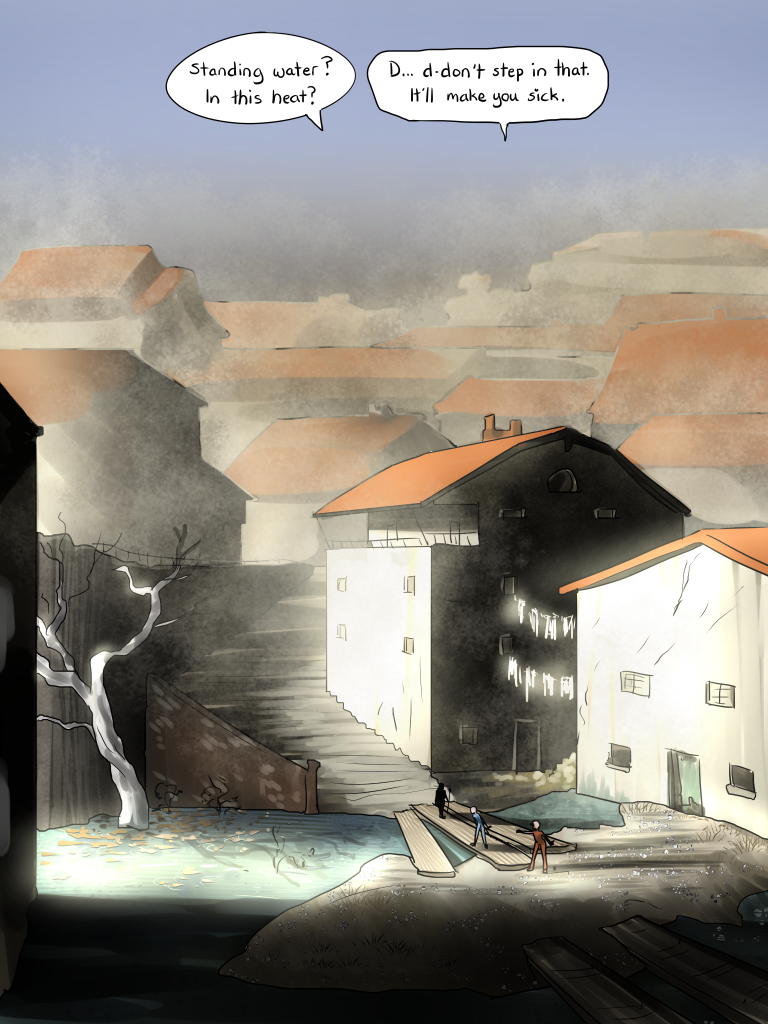 On a sidenote, having water going under your house is bad for structural integrity … oh, the poor people who own that house.
Lee M 10th Jun 2018, 3:44 AM
edit delete reply

Well, no puzzle as to why it smells bad. Where's Joseph Bazalgette when you need him?
Sheela 10th Jun 2018, 5:22 AM
edit delete reply

To be fair, a dusty haze is quite similar to a fog. I reckon the biggest difference would be that a Fog is quite white/grey, while a dusty haze would be more dirt/sand colored. Also, dust in the air, steals a fair bit of the sunlight.

Ah.... Has anyone considered the fact that they have foul water there, sitting on the surface, and there is a river near by that our two heroines went swimming in, and water flows down-hill, and they were travelling upriver?

"Uh... Didn't we both go swimming in it a while back?"
A Fan (Guest) 10th Jun 2018, 8:53 AM
edit delete reply
LoL, the modern style buildings took me right out of the story for a bit.
How developed is this world?
Because we saw nothing but sword and board with addition of magic for weaponry so far, animal draught carts for travel, although the two heroines' clothing also seems a bit modern.
Sheela 10th Jun 2018, 11:49 AM
edit delete reply

Actually, ancient Roman Insulae, were quite square in design, and was essentially Roman working class ghetto.

The main difference, would be that they had small gardens in the middle of the insulae, in order to light up the interior - But if you had something like, oh, lets say some glowing mana crystals, that could be solved right quickly.
Guest (Guest) 10th Jun 2018, 5:21 PM
edit delete reply
The Romans invented concrete (but not with steel reinforcement), glass was around even earlier - probably invented as a by-product of casting bronze weapons in sand, but don't quote me on that!

Bricks were around in the 3rd millennium BCE, made from baked clay, often with cloth or straw embedded to give strength. And the natural shape to build a structure when making it from bricks, is a rectangle!

As for the clothes, I do think they are a bit modern looking, but honestly, do we really know what people wore back in the middle ages? And what they would have worn if magic were available to use as a power source? Modern fine textiles came about because of steam powered looms. If this fantasy world uses magic-powered looms, then they could be making space-age clothes!
chrystal_dark 10th Jun 2018, 5:26 PM
edit delete reply

This world's not following the exact same pattern as our world, but it might be that the houses should look different. It just seems to me that multistory brick and light frame houses always looked pretty much like this. Maybe the infilled panels should be drawn clearly.
Sheela 10th Jun 2018, 7:36 PM
edit delete reply

Ok, so a very simplified progression of "cheap" houses in our world, basically goes like this :

0) Neolithic to late stone age : Pit houses, basically a round hole in the ground, with a roof over it, and a fire pit in the middle, very basic, can be built with a minimum of tools - Basically an evolved tent.

1) Stone-age up to Bronze-age : Round house with straw roof, low walls, because walls were hard to build - A slight improvement on the ancient pit-house. Walls were often made of things such as stone, daub and wattle or even Adobe bricks.

2) Bronze-age to late Iron-age/medieval/modern times : Better axes and saws allowed for timber framed building with wattle and daub walls. They were cheap and could often be build on the spot. Usually square, as it makes the timber joints simpler. Very flexible type of house, extremely popular in europe, even today.

3) Iron-age to modern times : Square brick houses, while bricks are an ancient invention, they didn't really catch on until better transportation was available to move the bricks around - They are heavy!


Now, during all ages, expensive houses, such as palaces and temples and such, have often been ahead of their times, and thus you get an odd mix of everything.

There are also some cases where some materials have been easier to procure than others, such as wood, hard to get in a desert, but easy to get in a forest.
Meanwhile, making Adobe bricks is easy in a desert area.

As for Views little world here, it seems to be set in late iron-age, early medieval age. They probably have small amounts of steel available too, y'know .. for swords and such, but not mass amounts, such as making buildings out of it.

Which would mean they would probably have fired bricks available in large enough amounts, enough at least, to build city houses out with bricks - Farm houses are probably still daub and waddle constructions. (cheaper)

This area is mostly brick with surfacing, because magically digging tunnels produces huge amount of fine dust perfect for both brickmaking and daub.

Which coincidentally fits in rather well, with a late iron age, early medieval period of society. :)
Pyo (Guest) 11th Jun 2018, 8:16 AM
edit delete reply
The big visual differences are probably more difficult to do in a comic than they are in reality.

First, lacking good heating (except for rich Romans) houses were build with few and low windows and small ceilings - that's difficult to see in art if you don't really have anything to compare to.

Then Western medieval cities were friggin' cramped. You had a very limited amount of space between the city walls and every square meter needed to be used. There's some fairly distinct architectural "solutions" that might make the visuals more "dated"; namely that the second floor was often build larger than the ground floor, thus increasing space above and still keeping alleys/streets reasonably broad at the bottom. Also: using combinations of wood and brick/stones.

But anyway I don't really get a too modern vibe with these houses.
Sheela 11th Jun 2018, 9:50 AM
edit delete reply

As for the windows, glass was fairly uncommon until the renaissance period, so windows were relatively small and shuttered, if not barred.

Here's a nice video from Shadiversity on the overhang thing.
He does a good job on explaining it .. in detail. XD
marmelmm 11th Jun 2018, 11:52 AM
edit delete reply

He updated the haze, it looks pretty neat now.

Ad a few dark smoke stacks, and you could make it look like industrial pollution in a jiffy.
Guest (Guest) 11th Jun 2018, 4:13 PM
edit delete reply
For me this page clarified why the chapter is called “Plumb”
Post a Comment