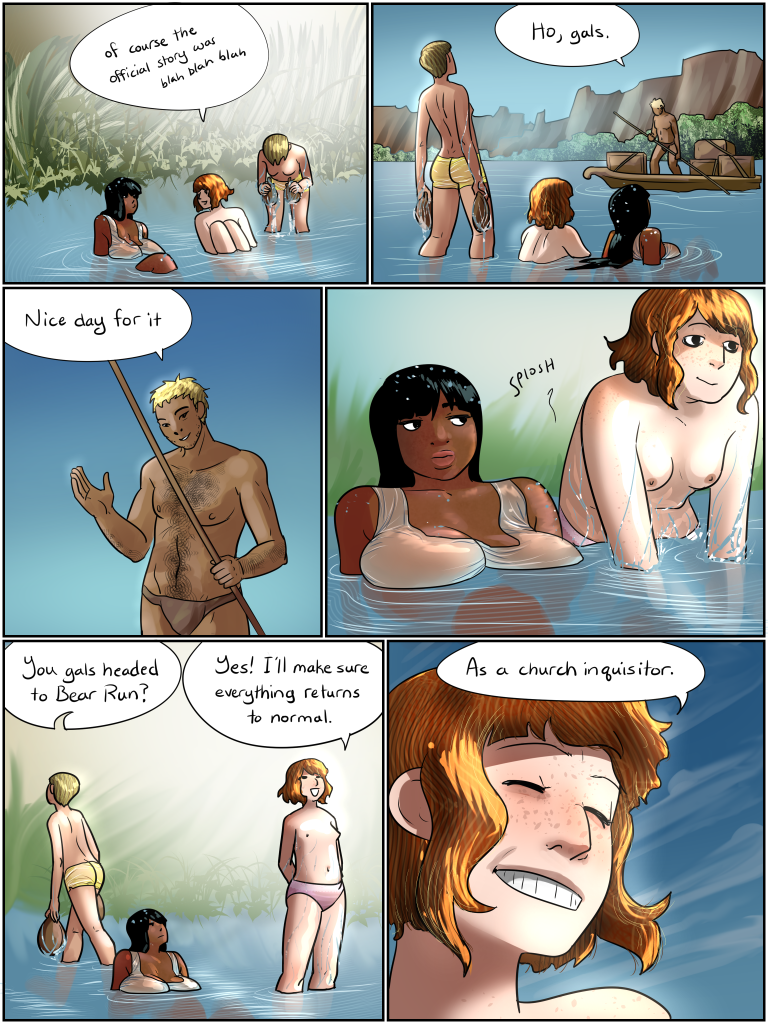 In the fictional society depicted in this comic, how much of a nudity taboo is there generally?

From recent comics, I guess that anyone may be topless if they like and it's not a big deal. And Venne just doesn't roll that way.

Or is it just that they are out in the countryside where things are looser?

Also, in the comic, if someone says "the Church" there is one that everyone assumes they mean? And the Church must not make a big deal out of bare breasts, given that an inquisitor is flaunting hers at a passing man. I'm guessing this Church is rather more tolerant of sex than the Catholic Church in our world.
Cuddlion (Guest) 25th May 2018, 12:18 AM
edit delete reply
Unfortunately, in times of social/economic upheaval, religious institutions tend to become polarized towards extreme behaviors; either as sanctuaries for the oppressed, or authoritarian enforcers.
view 25th May 2018, 12:40 AM
edit delete reply

More like "The Church" is the mafia's real name, and inside the churches they have rows upon rows of gambling tables, where you can gamble your soul for "protection and salvation from Demons" - and quite by accident, it works, so they are wildly popular.
After all, you cannot sell your soul to the Devil, if you already sold it to the local church!

On an unrelated sidenote :
In panel One, it almost looks like Guinevere is trying to attach the waterskins to her nipples! >_<
marmelmm 25th May 2018, 7:10 PM
edit delete reply

I'm gonna guess that the word "church inquisitor" isn't going to bring a good reaction from him.
chrystal_dark 25th May 2018, 6:29 AM
edit delete reply

The major problem with any church is that behind it there is usually a god or goddess.

If the deity in question is a moderately hands-on kind of person, there doesn't tend to be much of a problem. It's like in Terry Pratchet's Disc World, where if someone said they were an atheist, peaople would tend to shuffle away and wait for the lightening!

But if the deity is more of a stand-offish person who prefers not to get involved, then you are left with a church full of devout believers with no actual divine guidance. That is a recipe for - well, what we have today!
Sheela 25th May 2018, 1:04 PM
edit delete reply

Ohh right .. forgot about him.

Though to be fair, there are so may gods.
Like, say, the Troll gods from David Eddings books …

Although there was some overlapping of their boundaries.
Like, Zoka was aften more in the "mood" after a good kill.
Ghnomb was more likely to kill, if he could eat the corpses.
And so on, and so on... :D

Also, they are not very smart, but they do have an odd form of cunning.
Like, when the protagonist asks them for a spell of invisibility.
Initially, they have a bit of a hard time with the concept.

But eventually they decide to split every moment up into "now" and "not-now", and then they give him the ability to step in-between the two … essentially rendering him invisible to everything .. even other gods !

That ruffles a few feathers along the way, the other gods are not that pleased.
Basically they break all of creation into two, just to make him invisible.
Smart they may not be, but they *are* pretty strong. :D
TeeKay 25th May 2018, 5:36 PM
edit delete reply

I can't remember that story... where was it? o.O

Suddenly kinda feel like reading both the Elenium and Tamuli series again, now that you reminded me of them. Back (waaay back) when I last read them I preferred the Belgariad and Malloriad, but Sparhawk's slightly grittier experiences might be more to my liking now. (Never mind the fact they're both basically the same story...)
TeeKay 25th May 2018, 5:38 PM
edit delete reply

There's no article on his name though, it's just "Offler".

I feel like there are probably more suitable gods in the Discworld pantheon anyway :P
Sheela 25th May 2018, 7:28 PM
edit delete reply

I think it was in The Shining Ones, where he helps the Troll Gods to escape from the .. erhh .. y'know, that thing .. Berillium, was it ? I forget, it's been a while since I read it, details are iffy. XD

It was that thing that also makes him overpowered.
And makes it impossible for gods to predict his future.
TeeKay 26th May 2018, 7:03 AM
edit delete reply

Still don't remember that specific part, but after spending an hour clicking around the Eddings Codex I know what you're talking about.
Sheela 26th May 2018, 6:04 PM
edit delete reply

It also created him, and got turned into a pair of rings !

I think you got it right. I definitely remember there were rings, and I'm sure there was plenty of schwartzfighting in the books too :D

It's weird btw... There's so much I've forgotten, but I still remember some details like that Sparhawk won the final duel because of a modification to his helmet that let him withstand the final blow of a sword ... I mean schwartzfighting combo ending in an unavoidable hit on the head (the modification having been introduced since his opponent turned coat and left the order).
Sheela 25th May 2018, 1:05 PM
edit delete reply

I think Rinatta agrees with you on that. But Guenie shared my humble opinion! And Venn is fairly non-committal on the subject!
TeeKay 25th May 2018, 5:40 PM
edit delete reply