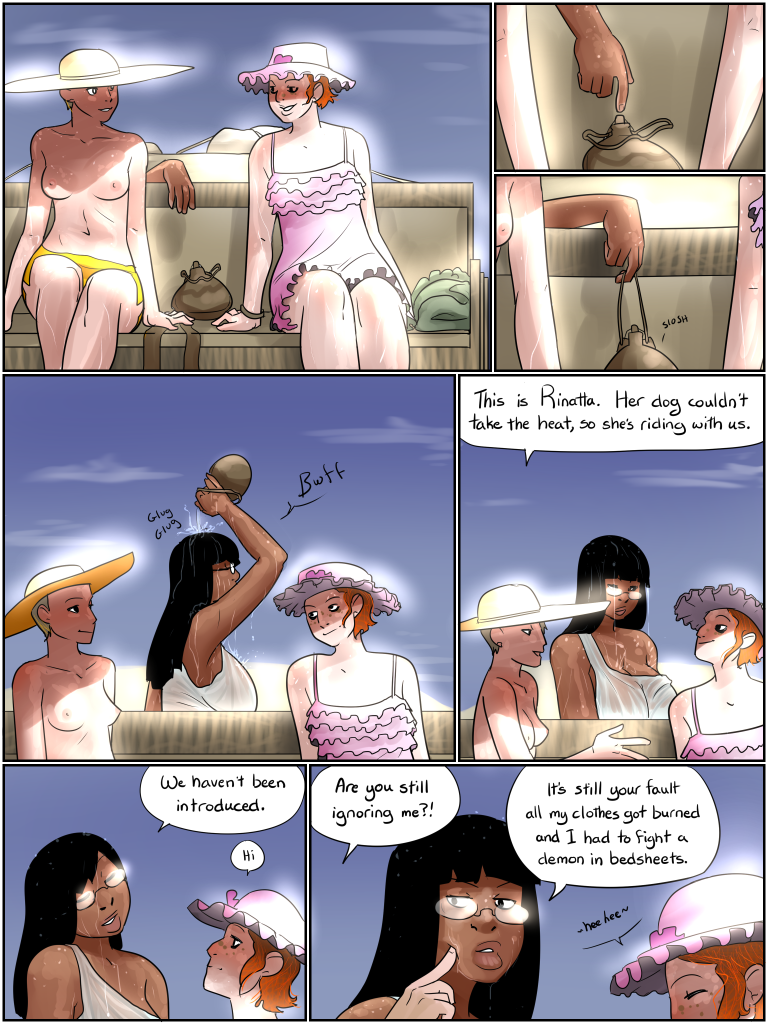 This page took a long time to draw, although it looks pretty simple if you don't pay attention to how many figures there are.
User comments:
RhinocerosGoggles 11th May 2018, 11:55 PM
edit delete reply
I really like the glowing light-effect. Looks good!
Lyon 12th May 2018, 3:31 AM
edit delete reply

I think that is absolutely beautiful, View. Rinatta doesn't seem to mind that Guin doesn't mind getting sunburned nipples.

(I've had sunburned nipples. In my younger days before everything went South. Believe me, it is not pleasant having sunburned nipples! - The one consolation is having someone else rub moisturiser into them!)
Malcadon 12th May 2018, 10:45 AM
edit delete reply

Also, they really need to invest in making that a covered wagon, if just for the shade.
Sheela 12th May 2018, 10:34 PM
edit delete reply

Well, they USED to have a covered wagon when they traveled with Tia.

That'll be a while.
A Fan (Guest) 12th May 2018, 5:51 PM
edit delete reply
I also thought Tia was going to blow off the whole marriage deal and travel around smashing things with them xD
Or she would just mess up and cause some massive faux-pas and the king would call it off because of some diplomatic drama she caused with his ally or something like that.
Shame though, the only thing that is hotter than two hot ladies together... is three hot ladies together.
The black under the eyes of Rinatta make me think that she is somehow that long-eared creature on chapter page. Can the demonized peoples mask themselves like that? Or would "the shield" over human territories burn them anyway? Or is that shield only over villages, making travel between settlements veeery risky proposition?
view 12th May 2018, 9:11 PM
edit delete reply

Those are things that will have to be answered later!
JoneK 13th May 2018, 9:50 AM
edit delete reply

Why. no, I didn't realize how complex the art-