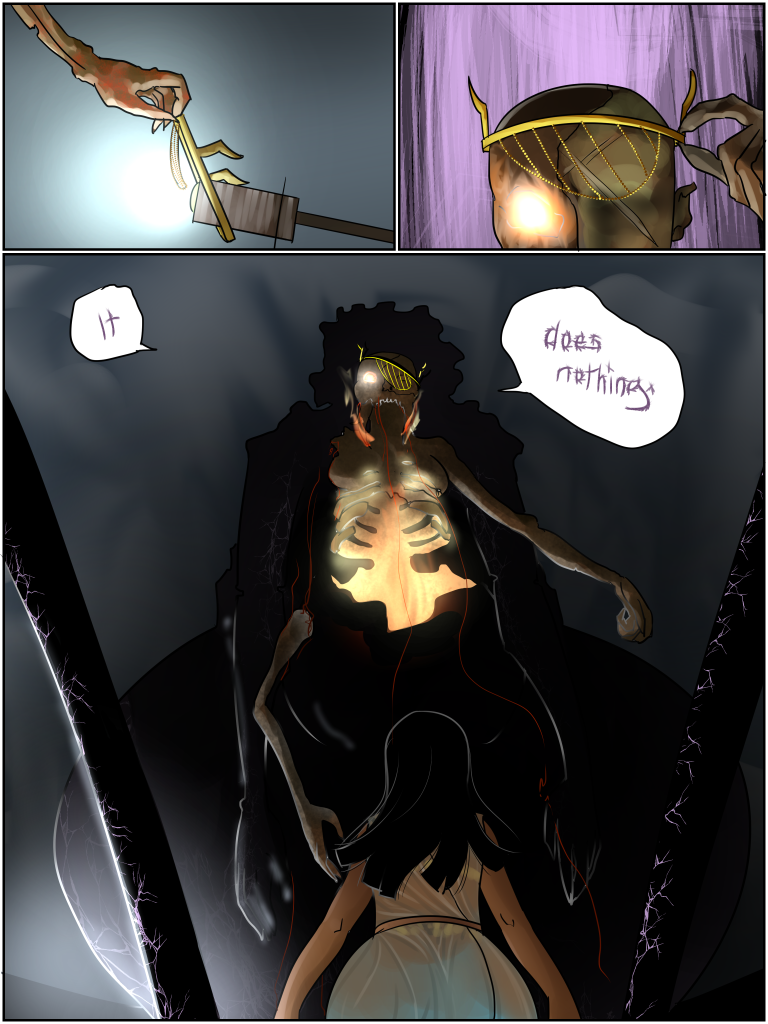 Hm. I don't like this page at all!
User comments:
Post a Comment
Jojo42 (Guest) 24th Apr 2018, 9:44 PM
edit delete reply
Love your art (always have) but your dialog is getting weak. I haven't been able to follow what most of the dialog for the last 3 pages is actually supposed to *mean*. Most of it is just people saying lines with no way to understand the subtext. Please say you're planning some exposition in the near future?
view 24th Apr 2018, 10:37 PM
edit delete reply

It's fairly clear if you go through and reread.

Then we've got the dragoncrown, which placed on a pregnant natural human turns the baby into a Dragonkind, giving it the ridiculous powers of the second category.

The Ant Queen here is in the second category, so can't actually breed. Her children are produced more like summons as temporary shock troops, able to fight within (Some short time span) of birth and die within a few days of being born.

She's attached to them, though, and wants them to be stronger. This leads her to covet the dragon crown as a way to let them be born stronger as Dragonkind. But as she herself is already unnatural, the Dragon Crown can't affect her children, even if you consider them full children.

Also, 3 pages back, Guin just wants to get into every hot girl's pants.

Now, the question I have is whether the Dragon Crown would affect natural animals as well as natural humans, but that probably won't relate to the story. Would it create demons?
view 25th Apr 2018, 12:48 AM
edit delete reply

Riverfolk (not "humans") have the natural ability to use circle magic, casting spells by creating a circle that resonates with a powerful spirit.

If this goes haywire (or is pushed to go haywire), they can basically turn their body into a resonant circle. The crown's just a really gentle, controlled way to do it.

I remember reading the Riverfolk race thing, but DnD has me assuming any physically nonstandard race is human.

You've already seen one or two in the background, but yes. Guen's spent more time with them than with Riverfolk.
Pyo (Guest) 25th Apr 2018, 9:14 AM
edit delete reply
I thought something similar in the diving comic when suddenly there was some conspiracy stuff going on and I was just sitting there "have I missed a prequel?" And yes, I got a bit of that feeling here, too.

I mean, it's not on a level that I don't in general terms understand what's going on. And I do think an "in medias res" approach to comics is fine - I don't want to read huge info dump textbubbles.

But I'd agree that maybe occasionally it could be a bit - smoother, in terms of storytelling? Not that I have any useful specific recommendations on how to do that. ^^
Sheela 25th Apr 2018, 11:21 AM
edit delete reply

That's one of the dangers of reading a comic as it is being created, things that may be explained later in the comic, may jar you a bit before they happen.

This can actually be used as a plot device, akin to chekov's gub, partially reveal something, and then reveal the full detail later - This will allow the reader to reflect on the comic as a whole, and see where things fit together - Like a jigsaw, once the frame is done, it's easier to divine the juicy middle.
TeeKay 25th Apr 2018, 8:21 PM
edit delete reply

There's a certain comic that comes to mind when considering this particular plot device, but I suppose there's a slight chance someone's not yet read it so I won't say its name since even that might constitute a slight spoiler...

Aaaanyway... I haven't had any trouble following events, the dialogue etc (apart from that one time I mixed a clothed Venne with a (nearly) naked Tia >_>).

I do however think that overall the exposition is usually always ... natural. I much prefer this to forced exposition for the sake of exposition.
view 25th Apr 2018, 8:46 PM
edit delete reply

I tried to make the characters pretty distinct, but two of them do have black hair. Maybe one of them should get a haircut or fall into a vat of pink dye.
Sheela 25th Apr 2018, 10:47 PM
edit delete reply

Indeed, confusing the two of them that time really was just me being a blind numpty.
Sheela 24th Apr 2018, 10:12 PM
edit delete reply

The goggles .. they do nothing.

I can't for the life of me remember the name of the "movie" they were shootingin that episode of The Simpsons. Just that Bart wanted to be the sidekick, Milhouse got the part, and then didn't show up at that crucial moment...!
Sheela 25th Apr 2018, 11:23 AM
edit delete reply

Ahh, Simpsons references usually get caught by someone. :)

Guessing the Ant Queen doesn't particularly like this page either, given how things turned out for her. :P
RandomTroll (Guest) 24th Apr 2018, 10:44 PM
edit delete reply
NULL ROD REFERENCE

That disappointing feeling when you realize getting what you want doesn't always have the outcome you thought.
chrystal_dark 25th Apr 2018, 6:38 AM
edit delete reply

"Will someone PLEASE think of the CHILDREN!"

I think they would taste delicious grilled ! :)

That said, the ant queen is in many ways a quite tragic character, her children all die within a week .. that must hurt.
marmelmm 25th Apr 2018, 6:26 AM
edit delete reply

Ant Queen: Sorry, luv, but this is covered in the rulebook under the heading of "Tough $#!+"...

I didn't even notice the tush until you mentioned it .. I think the burning queen steals the page.

If anything, the first panel stands out to me, as her hand doesn't actually clasp the crown, but he got it right in the second panel. Apart from that little detail, it all looks good to me.
TeeKay 25th Apr 2018, 8:24 PM
edit delete reply

Can't believe I didn't notice that >.<

view, even if you don't like the page, you've got a really interesting baddie there, and composition that really focuses the attention. Might not be perfect, but it's definitely good...
JoneK 25th Apr 2018, 9:19 PM
edit delete reply

One enemy in that game is very similar to your spider queen.. On that 1 video of a 1 mission that has been released =D Just checking..
view 26th Apr 2018, 11:12 PM
edit delete reply