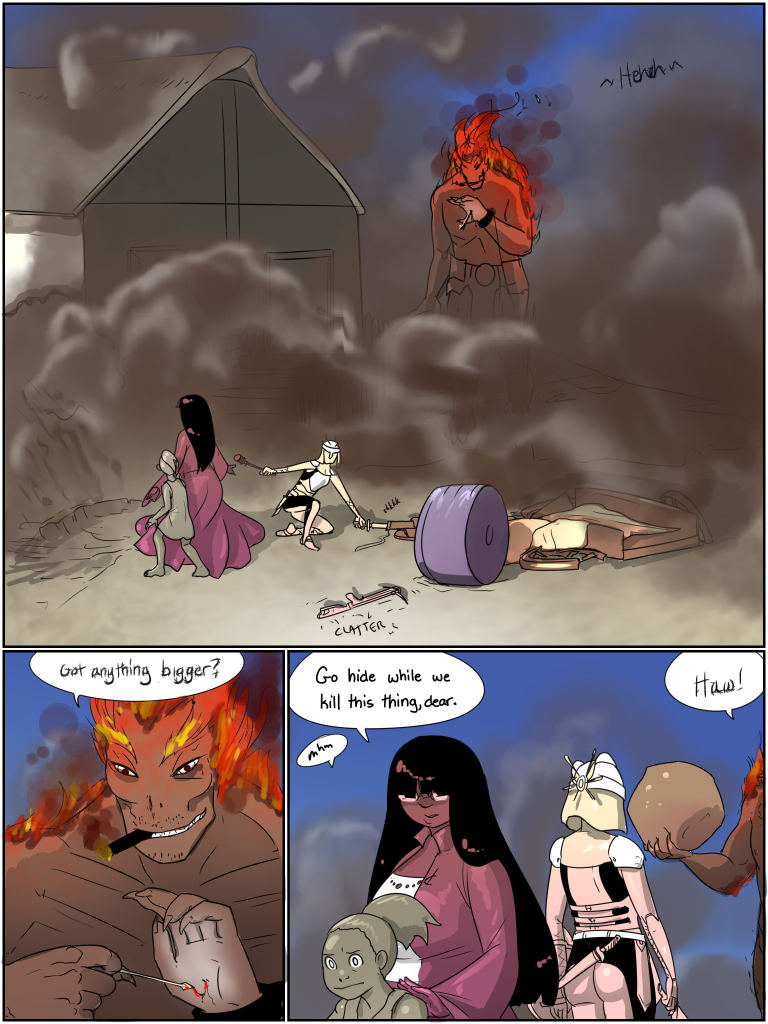 Someone tied a string to his wrist! I tie a string to my cat when I walk so she doesn't get in trouble. I wonder if it's the same thing?
BUMBLEBEE 8th May 2017, 2:11 AM
edit delete reply

I may be a bit slow, but if they're there to steal the nearly depleted old battery, wouldn't they probably be pretty interested in the brand spanking new one too?

Also, I don't see a red stain in front of the cart, so maybe the sloth got away. (Maybe the "cat" is a mean mega-sloth. That'd be unexpected...)
ColdFusion (Guest) 9th May 2017, 6:53 PM
edit delete reply
I just realized we never got a good head-on look at that thing. I was worrying about the cart's puller-animal too but I couldn't remember seeing one or what it was.
Giant sloth (that is shaped like a normal sloth rather than a giant sloth) is a top quality fantasy beast of burden. Those are great.
Sheela 9th May 2017, 8:45 PM
edit delete reply

True, it could be a giant Mustelid type of animal .. like a giant Wolverine.
those are not exactly slow, and they're pretty dangerous on their own.

Common mustelids, would be minks, weasels and ferrets - All of which are both quick and agile.
TeeKay 11th May 2017, 10:06 PM
edit delete reply

I don't think any of the ones you mentioned fit the general shape of the thing nearly as well.

It doesn't look exactly like a (normal) sloth either, mostly in that it looks pretty heavy in the shoulder area. But the proportions of the limbs, the claws on the front limbs, and the head look so much like a sloth that that's probably what it'll be for me until we learn otherwise.

Agreed though, a great touch. A lot better (I think) than the big horse things in Elfquest for example, which were just basically a more elk(or moose)/gnu-like horses.

Roadsloths are an integral part of the cargo hauling industry!
Sheela 12th May 2017, 5:50 AM
edit delete reply

Long may the Roadsloths live ! :D

That said, real sloths are horrible on the road.
They crawl along on their elbows and knees, they cannot walk on their paws.

That's why I thought it would be a Mustelid, like a giant wolverine, because they look much like a sloth in shape, and they do walk on their paws.
view 12th May 2017, 12:01 PM
edit delete reply

"Go hide while we kill this thing, dear."
Current contender for Best Line Ever.
Post a Comment